You are here: Home / News / Virtual FarmVille Aloe? Check it out Facebookers!

I still have not caught the FarmVille craze as many out there have. I get the requests from friends wanting me to join or sending me some seed they think I should plant…after I join their FarmVille team so I can help them raise their barn. I’m nothing but confused about this game. But that’s now what I’m here to talk about, so please don’t try to explain it to me by this means.

Well, FarmVille Facebookers, I heard through the grapevine that FarmVille is going to be adding an expansion sometime this week (ooooh, ahhh) with a launch of FarmVille English Countryside. Something about a mustached Duke with a fancy airship. That part sounds kind of cool actually.

Anyways, in order to prep for your trip to this expansion country that is in england (?), you need to be at least a level 20. So obviously you need to be gaining lots of experience points. Fact: Aloe Vera is especially high in XP! Even virtual aloe vera is awesome, and that does not surprise me at all! It kind of make me want to ask someone about FarmVille, so I could join and make an exclusively Aloe Vera farm. 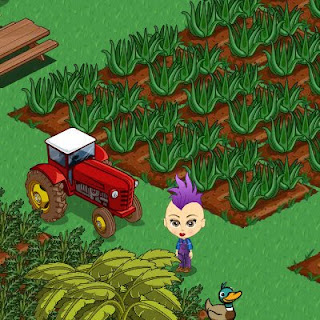 While we are on the topic of farming aloe, I found an article about a man, Ferdie Du Preez, who has an exquisite aloe garden. “It’s not even aloe flowering time yet, but he has so many different species of aloes.” Turns out it’s no coincidence all of these aloes gathering in one place. Du Preez has collected these aloes because they go with his 40 different euphorbias. To read more about his garden and all the different types of aloes he has collected check out the full article.